The Cree Board of Health and Social Services of James Bay and the Cree Nation Government join in celebrating the announcement of construction of a new Eeyou-Eenou Regional Health Centre in Chisasibi. CBHSSJB Chairperson Bella Moses Petawabano and Grand Chief Dr. Abel Bosum welcomed representatives of the Quebec Government to Chisasibi for the announcement. 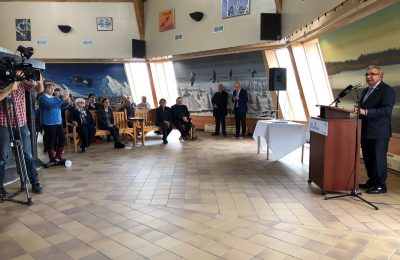 The project was announced during a visit to Chisasibi by Danielle McCann, the Minister of Health and Social Services, with Sylvie D’Amours, Minister Responsible for Indigenous Affairs, joined by Denis Lamothe, MNA for Ungava.

Funding for the project is from the Quebec Government, and is linked to a new five-year funding agreement that was signed the same day as the Health Centre announcement. The CBHSSJB will manage the project and will own and operate the new Centre.

The new $300M, 20,000 m2 facility will combine a 52-bed hospital for the population of Eeyou Istchee (approximately 20,000), and a Community Miyupimaatisiiun Centre (CMC), offering front-line services and community health for the local population of Chisasibi. The new Regional Health Centre is scheduled for completion by 2025.

This new facility will replace an outdated hospital open since 1980, and community health services that are now housed in trailers. The current hospital has no surgical capacity and very limited space to serve a growing community of 5,000 people in Chisasibi, as well as the other Cree communities that rely on Chisasibi for hospital services.

The new Eeyou-Eenou Regional Health Centre will be equipped with state of the art medical, telemedecine and diagnostic technologies to serve the population in the region. The nearest hospital centre is almost 1000 km away, in Val-d’Or, making Chisasibi an important regional hub for medical services.

“The construction of a new Regional Health Centre that will serve all of our people, not only the people of Chisasibi, is a major milestone in providing better access to services on the Territory. This new facility will enable us to provide many services currently not offered in Eeyou Istchee, and to enhance many others. All of these are crucial to the well-being of our people, to our commitment to bring Miyupimaatisiiun to the people of Eeyou Istchee.”

“The Regional Health Centre will be a big facility, but it is not just about steel and concrete. First and foremost, it’s about people – responding to the human needs of the Crees through human care. But the new facility is concrete in a sense: it gives concrete expression to the vision in Section 14 of the James Bay and Northern Quebec Agreement of bringing health and social services home to the
Crees of Eeyou Istchee. This is the vision restated in the Board’s Strategic Regional Plan.”

The new Eeyou-Eenou Regional Health Centre will provide a culturally safe environment designed around community needs. The lack of many services in the region currently means that people often have to travel to Val-d’Or or Montreal, which is costly, and places pressure on other parts of the health network. New hospital services that will be offered in the Regional Health Centre, and that are not currently available in the region, include:

The old hospital building will be repurposed and the site of the new Centre will be in a central location in the community, with easy access to medical evacuation routes.